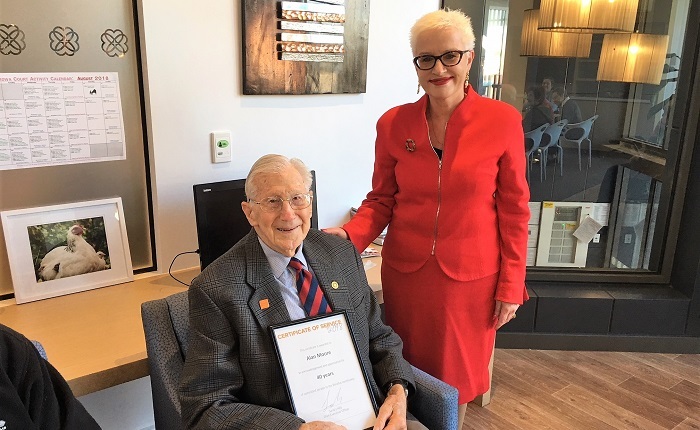 Alan was on the Corowa Court Committee, when it was suggested that Anglican homes purchase the land behind Corowa Court for extensions – Alan was the first resident to move into this extension after its completion in early 2016.

As well as being an integral member of the Corowa Court Committee, Alan also volunteered at the Op Shop, holding a few different roles throughout his time. Initially, Alan was responsible for running unsellable items from the shop to the tip, and for a while he was the Op Shop handy man, fixing up items in his workshop and making them like new again.

Alan was later content working at the counter, enjoying the customer interaction.

“I always enjoyed working there and meeting different people,” he said.

“We formed a tight knit community of friends who all helped other people. If a room needed painting, we’d paint it, it’s just what we did.

Benetas CEO, Sandra Hills OAM, described Alan as a humble and generous person who has invested himself over 40 years for the betterment of Corowa Court and its residents.

“We are incredibly grateful to Alan for his outstanding contribution and are honoured to be able to recognised and celebrate his dedication and commitment here today,” she said.

“Benetas volunteers are the backbone of our organisation, offering their time to enriching the lives of others. Alan has given himself tirelessly to the Corowa Court community for four decades and is the embodiment of the culture that has developed here.”