New group bring men together at 90 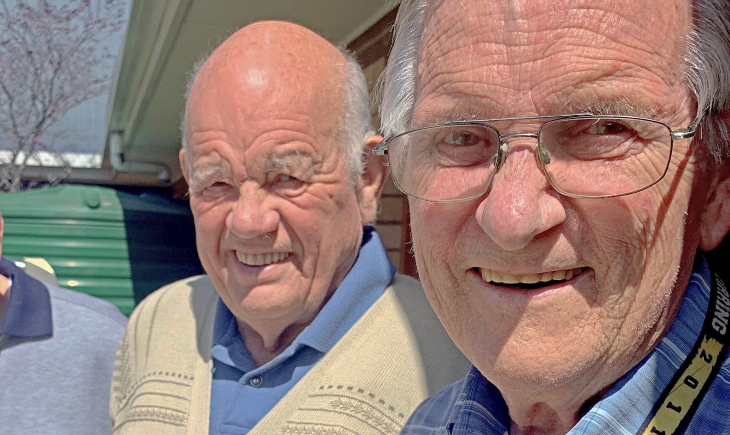 It’s a small group of men. One who ran 100 meters in 10 seconds flat. One who came from London with a love of poetry, and one who umpired the VFL and later AFL at the MCG.

“We don’t talk about politics here,” says John, a 90-year-old founding member and Benetas St Georges’ aged care resident. “It’s just about getting together here and having a good time.”

The St George’s Men’s Den was established in July this year by Benetas Pastoral Care Practitioner David Wilcox. Running twice a week with football, BBQs and repair shows, the club has gained a loyal group of members at the aged care site, with a number of residents who never miss a gathering.

“We’ve based it on the simple premise of getting people together and having a yarn," said Mr Wilcox.

David is well aware of the increasing statistics of mental health challenges among men, with 75 per cent of suicides in 2017 reported to be males.

“Men are very good at isolating themselves and can find it hard to reach out for the social supports they need,” he said.

“This can be particularly hard for men in aged care where they are in unfamiliar surroundings and not living with their family and loved ones.

“The Men’s Den is a simple but important way for us to tackle this. I implemented something similar at Benetas’ aged care facility in Gippsland, Dalkeith Gardens, and saw there was room to include it here in Altona Meadows."

David commented on the expectation that older people no longer seeking out new friendships.

"The thing is, whatever our age, we still require spaces to connect with one another. Our chef at St Georges’ has been able to join us here and there. Making egg and bacon toasties and have a ginger beer and some nibbles with us. All in all, it sounds simple but it’s been a huge success.

Pastoral care is about meeting people where they're at

“The men are incredibly supportive and one of our participant’s wife is absolutely blown away by the impact it’s had on him. She told me he can often be quiet but after at the Men’s Den he just talks and talks and talks.

“Pastoral care is all about meeting people where they are and finding what brings them fullness. The biggest risk we now have is possibly too much interest – the women have suggested they may start dressing up as men to join us.”

If you are a male and would like to volunteer with the group, please contact the Community Coordinator at St George’s Carol Digna: carol.digna@benetas.com.au.