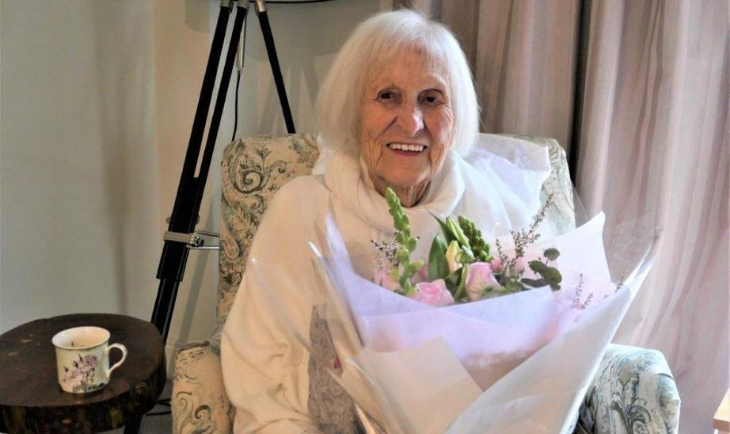 Daphne Muggeridge was born on 28 July 1920 in Tooting, London and joined the British Civil Service at age 16.

In 1945 after Germany surrendered, she became an Army driver. During this time she met her future husband Ted while doing crosswords in a NAAFI (Navy, Army and Air Force Institutes) hut.

Ted had served in India during the war and was on his way to Australia. They married in 1947 in the UK before leaving for Australia.

They travelled to Australia on the Empire Brent and after five weeks they arrived in Perth, then carried on to Sydney. Their daughter Felicia was born nine years later.

Daphne became a Sydney bus conductor and was the first female conductor on a single level bus in her area.

Daphne then ran a bottle shop for 20 years while Ted worked as a fitter and turner.

Daphne retired at 60 and they moved to Bundaberg in QLD as Ted needed to live somewhere warmer due to poor health.

After Ted passed way, Daphne moved into an aged care village in Bundaberg at age 87.

Daphne moved to Gisborne in 2011 to live with Feli, who was working as a pilot for Virgin Australia.

Daphne also receives Home Care through Benetas and her Support Worker Margaret, made some shortbread with Daphne's name and the numbers "100". She was absolutely thrilled with her surprises.

On the day, Daphne said, "I am still here, and I am still doing crosswords!"

The LEP team is looking forward to celebrating Daphne's birthday on-site once COVID restrictions are reduced.