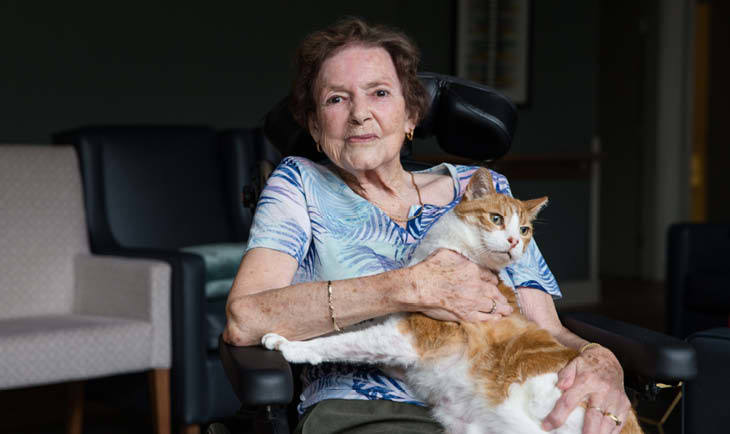 84-year-old Sheila is a resident at Benetas St Paul’s Terrace in Frankston South.

For the previous ten years, Sheila had been cared for at home by her daughter Carol. The pair chose the facility after speaking with Sheila’s GP about her changing care requirements. They also loved that the apartment was pet friendly.

Sheila’s constant companion in her place at St Paul’s Terrace is her pet cat, Mack, who is also a favourite amongst the residents.

“I’ve had him since he was four and he is fifteen now,” Sheila says.

“Mack loves it here. There are lots of nice visitors for him.”

“He’s allowed to wander up the passage. He doesn’t do too much of that but if people have their doors open they say ‘come in Mack’, and he goes into see them.”

Compared to her brief previous experience of living in a residential facility, Sheila appreciates the smaller group size of St Paul’s Terrace. Each area has eight residents who share the lounge and dining areas.

“There’s only eight of us here which is lovely in the dining room. We have very good friends here,” she says.

For Sheila, having everything available in one location makes it easier for her, particularly following a broken leg.

“I get looked after, especially now I’m bed and chair bound. They care for me non-stop.”

Sheila loves to visit the on-site hairdresser, Sandra, who does her hair on Saturdays. Sandra even came to visit in hospital following Sheila’s injury so she could get her weekly hair-do.

“She’s absolutely wonderful, and knows how much I appreciate what she does. She makes me look better,” Sheila says.

“We had a party here,” Sheila says. “It was really lovely. We had a singer who was absolutely wonderful.”

One of the best things for Sheila has been the friends she has made and the activities they do together. Her neighbour is particularly fond of the music concerts which are performed. Sheila, meanwhile, enjoys heading with four of her friends to Bingo downstairs.

“I go four times a week to Bingo which is good fun,” she says.

Sheila says all the staff at St Paul’s Terrace are wonderful, and she gets to see her daughter Carol when she volunteers at the facility. Carol takes the residents out on excursions, like morning tea to Bunnings.

“I couldn’t do it without her.”

Sheila wasn’t sure about leaving home but now really enjoys her life at Benetas St Paul’s Terrace. For her, having Mack the cat around makes it 100 per cent better.