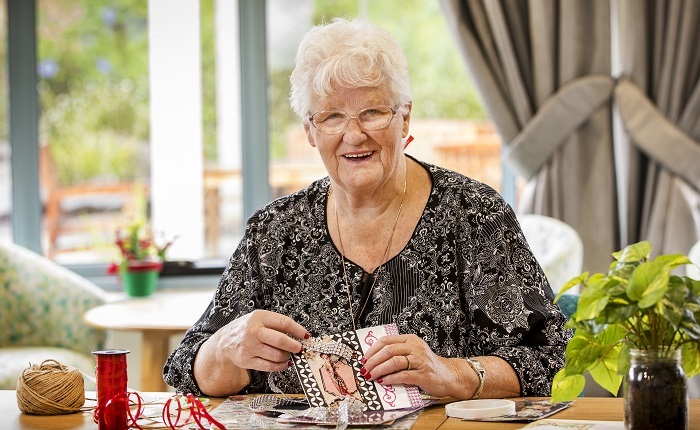 For Barbara Smith, a resident at Benetas St George's aged care in Altona Meadows, life is very much about helping her fellow residents and staff. Since the new refurbishment, which has transformed the environment to apartment style living, Barbara is delighted that her new home now helps her form closer bonds and gives her more freedom.

The refurbishment has turned the Peter Volk Wing of St Georges into two apartments with 15 bedrooms in each including their own kitchen, dining and café style eating areas.

The approach has been thoroughly researched by leading not for profit provider Benetas and facilitiates a more home like environment for residents.

Barbara, referred to as a ‘guardian angel’ by staff, has found that the new style of living allows her to develop a much closer relationship with her fellow residents, plus she gets to utilise the kitchen and dining facilities just as she would if she was still living in her own home.

Barbara says she loves the access to the communal amenities, specifically the kitchen,

“I like that I can prepare meals in the kitchen any time I want… Sometimes I even make raisin toast and a cup of tea late in the night,” she said.

73-year-old Barbara moved into St George’s in July 2017 after her husband passed away, choosing to enter into aged care herself.

“I didn’t want my children to have to make that difficult decision when the time came,” she said.

After helping to raise her three brothers and sister, Barbara naturally steps into the role of nurturer to her friends at St George’s, giving her a fulfilling purpose and mission and rendering her invaluable to many of the staff.

Barbara spends her time entertaining her friends with activities like the craft circle she leads twice a week. With Christmas around the corner, Barbara has been helping residents make decorations and christmas cards for their loved ones.

Residential Manager of St George’s, Amanda Pratt, is a strong supporter of the new model of care, explaining it was the reason why she moved to Benetas in 2017.

“Providing an intimate, home like environment, with personalised carers dedicated to each apartment, and access to general facilities such as a kitchen, is what all aged care providers are aspiring to do,” she said.

“And Benetas is actually leading the way and doing it.”

Stage two of the St George’s refurbishment was completed earlier this week, and is ready for 34 new residents to move in. Stage two also includes a brand new theatre room for residents, further enhacing the experiences of home.

Find out more about Benetas.