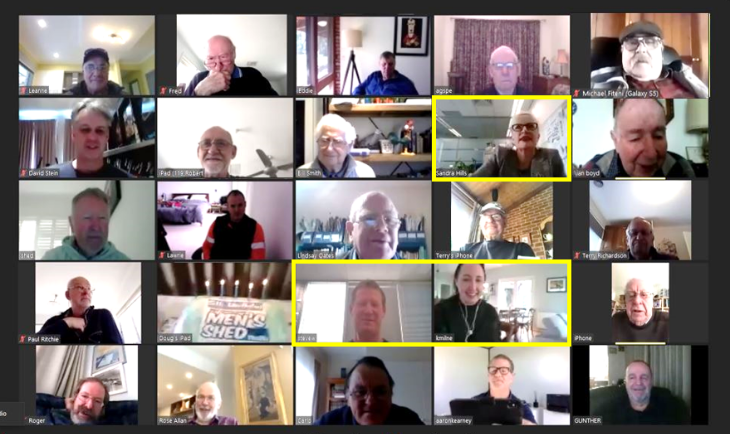 The Gisborne Men's Shed has been running since 2011 and is registered Shed number 85 of over 1,000 Men's Sheds in Australia. Unfortunately, at the beginning of 2014, the building being used to hold their meetings had to be demolished to make way for the new Macedon Ranges Health treatment centre.

While they were without their own building, they met two mornings a week at the historic Gisborne Court House for nearly eighteen months in order to keep everyone connected.

The current premises was officially opened on 31 August 2015, by Australian Men's Shed Association patron, Barry Golding. As a result, we recently celebrated our 5th birthday in this Shed.

With COVID-19 preventing them from putting on a celebratory BBQ, they hosted a Zoom birthday instead. Committee member Tony Cooke organised a morning tea pack filled with biscuits, tea and coffee to be delivered to every member to enjoy while they joined in.

Over twenty Shedmen logged in, many for the first time on Zoom. They were also joined by special guests including Benetas CEO Sandra Hills, Community Engagement Manager Kelly Milne and Manager - Property Infrastructure, Strategy, Infrastructure and Housing Steve Waite (highlighted with yellow borders in picture) and Aaron Kearney, who is a board member of the Australian Men’s Shed Association (AMSA).

Due to their birthday celebration, they were selected as AMSA Shed of the Week and Aaron Kearney later interviewed three of the Shedmen, Gunther Behrendt, Fred Smith and Tony Cooke.

This series of interviews can be heard on the AMSA podcast, The Shed Wireless Season 2 - Episode 5. These interviews start at the 20-minute mark of the podcast.

The men from the Shed are now all looking forward to being able to get back to their beloved Shed to get started on the next five years.

More information about the Australian Men's Shed Association can be found here.