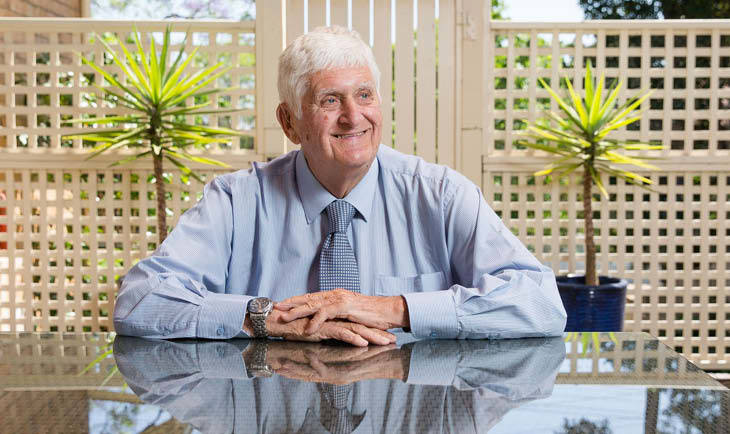 Originally from the UK, Terry moved to Australia 30 years ago, when Richard Pratt personally invited him to come and work for his company, Visy.

A talented paper maker, Terry was handpicked by Pratt following a worldwide search for someone to join his company and build paper-making machines.

“I was brought over by Richard Pratt. He just knocked on the door one night at 8 o’clock and said – we want you to come to Australia.”

Now residing in Patterson Lakes with his wife of 12 years, Terry has regularly attended Benetas’ Hurlingham Day Centre in Brighton East for the last 3 years.

“My wife chose it for me. It’s a great pleasure coming here,” he says.

“I also go to Benetas houses in Chelsea Heights and Moorabin. It’s a large group of people who get together every week and we go on trips occasionally, have competitions and things like that.”

Hurlingham Day Centre provides a range of activities, with regular trips to local markets and restaurants for lunch.

Terry always looks forward to his stays at Benetas, with the day trips a particular highlight.

“On one of the trips we shopped at the Dandenong markets and this Thursday we’re going to have Christmas dinner.”

Hurlingham Day Centre is beautifully decorated for Christmas. A sparkly Christmas tree is up in the corner with piles of Christmas crackers placed underneath.

They are all such nice people and are very welcoming.

The morning sun is shining through the glass doors. Residents sit around chatting with staff and watching television. Lunch is cooking away in the kitchen.

Terry considers many of the staff and fellow residents friends.

“They are all such nice people and are very welcoming.

“It’s a great pleasure to come here and sit and sunbathe with them and go on walks and trips. “My wife says sometimes, I hope you’re behaving yourself!”

A keen sportsman all his life, Terry once played professional Rugby League in England and held a black belt in Judo.

Nowadays, Terry enjoys keeping active by playing golf and tennis, and tending to his garden.

erry is looking forward to celebrating his 80th birthday in January with his six children, thirteen grandchildren, and his friends at Benetas.